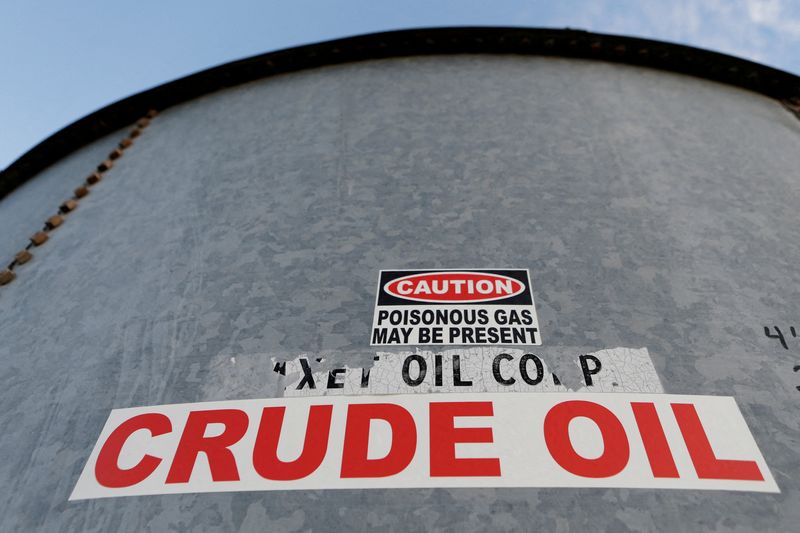 NEW YORK (Reuters) -Oil prices tumbled around 3% on Wednesday as investors worried that rate hikes by the Federal Reserve could push the U.S. economy into recession, dampening demand for fuel.

Oil prices pared losses, however, during the session after Fed Chair Jerome Powell pledged an “overarching focus” on bringing down inflation and reiterated that ongoing increases in the central bank’s policy rate would be appropriate, with the pace depending on the economic outlook.

“Powell seemed to change the mood of the market by seeming confident about the U.S. economy,” said Phil Flynn, analyst at Price Futures. “His words have soothed the market and put a bottom on prices for the short-term.”

Lawmakers of both major parties have expressed resistance to suspending the federal gasoline tax.

The White House asked the chief executives of seven oil companies to a meeting on Thursday to discuss ways to increase production capacity and reduce gasoline prices of around $5 a gallon.

Biden has publicly criticized Big Oil for banking big profits but he has rarely spoken directly to the heads of energy companies or their representatives, White House records and interviews with industry sources show.

Chevron (NYSE:) CEO Michael Wirth said criticizing the oil industry was not the way to bring down fuel prices and the government should change its approach. Biden replied he was unaware oil executives could “get their feelings hurt that easily.”

U.S. oil refining capacity fell in 2021 for the second year in a row, government data showed, as plant shutdowns kept whittling away on their ability to produce gasoline and diesel.

The U.S. Energy Information Administration said its weekly oil data, which was scheduled for release on Thursday, will be delayed due to systems issues at least until next week. It was unclear when the EIA will publish the report.

The $2.4 trillion set to be invested globally in energy this year includes record spending on renewables but falls short of plugging a supply gap and tackling climate change, the International Energy Agency said.